My husbands affair, breast cancer, self love, and my journey to boudoir

Editors Note: When “Ms. M” came in for her shoot with us we were blown away by her joy and positive outlook. When she shared some of her story it made celebrating her via a boudoir shoot that much more special. Her smile and energy was infectious and we were immediately eager to share her with you. Her story is inspiring and will lift you up. She worked hard to rediscover herself and pull herself into joy. We believe everyone needs a friend like this in their life and we've claimed “Mrs. M” as our own.

I divorced my husband in May 2016, after his affair and a marriage that always left me feeling like something was wrong with me. I was still trying to recover from all that in May 2017, when I learned I had breast cancer and would have to have a double mastectomy. In the space of two years, I had suffered two huge blows to my ego. I was already childless, because my ex-husband and I hadn’t been able to have children. I’d already had a hysterectomy after a biopsy turned up some funny-looking (but not yet cancerous) cells. Now I had been cheated on, I was divorced, and I was about to lose my breasts. I felt like a failure as a woman. I was convinced that I was unlovable.

Funny thing, though. As I went through the mastectomies and the breast reconstruction, I found myself surrounded by kind and amazing people: my parents, my brother, my extended family, college friends, a gaming buddy, random strangers, and my care team. And there was my brilliant, funny, and extraordinary plastic surgeon who was like my partner in crime. We cut up at every appointment. And somewhere, in the midst of all those hilarious appointments and the overwhelming amount of love and support I got from everyone, I got myself back. I remembered how much fun it was just to be me. By the time my reconstruction was done, I was cancer free, I had new and much perkier breasts, and I felt like the Bionic Woman, new and improved.

I decided 2018 would be about unleashing and celebrating me. I had already lost a lot of weight since my divorce. Now, in early 2018, I started working with a personal trainer. A few weeks later, I ran across an ad for Three Boudoir on my Facebook feed. I’m still trying to figure out what I had searched for that would have Three Boudoir showing up on my feed. But I’d never done a boudoir photo shoot before. The thought of getting made up and posing in my underwear was kind of exciting. It definitely fit in with the idea of unleashing and being bolder and braver. So, I signed up without thinking too much about it.

But in the weeks leading up to my shoot, I did feel some nervousness. I’d checked out the Three Boudoir website, and I knew it was about photo shoots by women and for women, but I hadn’t been that thorough in my research. The shoot location was a house on a wooded lot in North Beach, Maryland. Was this really legit? Would I wind up on a questionable website? Would my naked arse be flashed all over the Internet, causing me to lose writing clients and thus my sole source of income? I told my trainer about it, a couple days before the shoot. He looked doubtful. I told my parents about it the night before. They reminded me that I had promised not to embarrass them as I Unleashed in 2018.

My misgivings left me the moment I stepped inside the house. Melisa and Carrie-Anne introduced themselves and let me know what each would be doing during the shoot. We spent a few minutes talking about what had brought me here. Melisa asked whether this was a gift for someone. I said it was a gift for me. Once I finished telling them my story, they became my biggest cheerleaders. They used words like “queen,” “goddess,” and “inspiration.” They congratulated me on deciding to do the boudoir photo shoot. Then they explained how the shoot would go and left me to change into my first outfit.

The shoot was just like what you see in the movies. Melisa directed me on how to pose and, when necessary, adjusted me. Carrie-Anne snapped picture after picture. There was music, the click-click-click of the camera, and steady encouragement from Melisa and Carrie-Anne. “Yes!” “The goddess is coming out!” “Beautiful!” “Now look at me… now smile… laugh… gorgeous!” “Look at that jawline! Gotta get more of that!” “You’re a queen! Let everyone know it!” “Oh yes, honey, you’re a star!” When Carrie-Anne got a shot she particularly liked, she showed it to me right then. After we were done shooting, we went through my shots. I couldn’t believe it. I saw the sexy goddess. I saw joy. I didn’t think twice about placing an order. By that time, Melisa and Carrie-Anne felt like family. I could have talked with them all day. I hugged them on the way out.

I left that house feeling like the coolest person on the planet. I thought about those photos and felt like I could get any man I wanted. My shoot package had included two edited photos. By later that evening, I had those digital images in hand and couldn’t stop looking at them. I showed the more modest one to my cousin. The next day, I showed it to my trainer. He told me I should get it framed. I decided he was right, and I ordered yet another print.

Now I’m telling everybody about my photo shoot and showing them that photo. I’ve posted the Three Boudoir link on my Facebook page and told every woman in my circle to do a photo shoot with them. Every woman should do it, just to celebrate herself, no matter her age, size, body shape, or relationship status. I no longer feel like a failure as a woman. I’m still feeling like a goddess. And I’m open to dating again. I look at my photo gallery and think men would be crazy not to want me. But even if they don’t, that’s perfectly fine. Because regardless of whether they do or not, I know I’m amazing, both outside and in. The ladies at Three Boudoir captured all of that in my photos. I’m so glad I did the shoot, and I can’t wait to get my album. Those pictures show me just how far I’ve come. 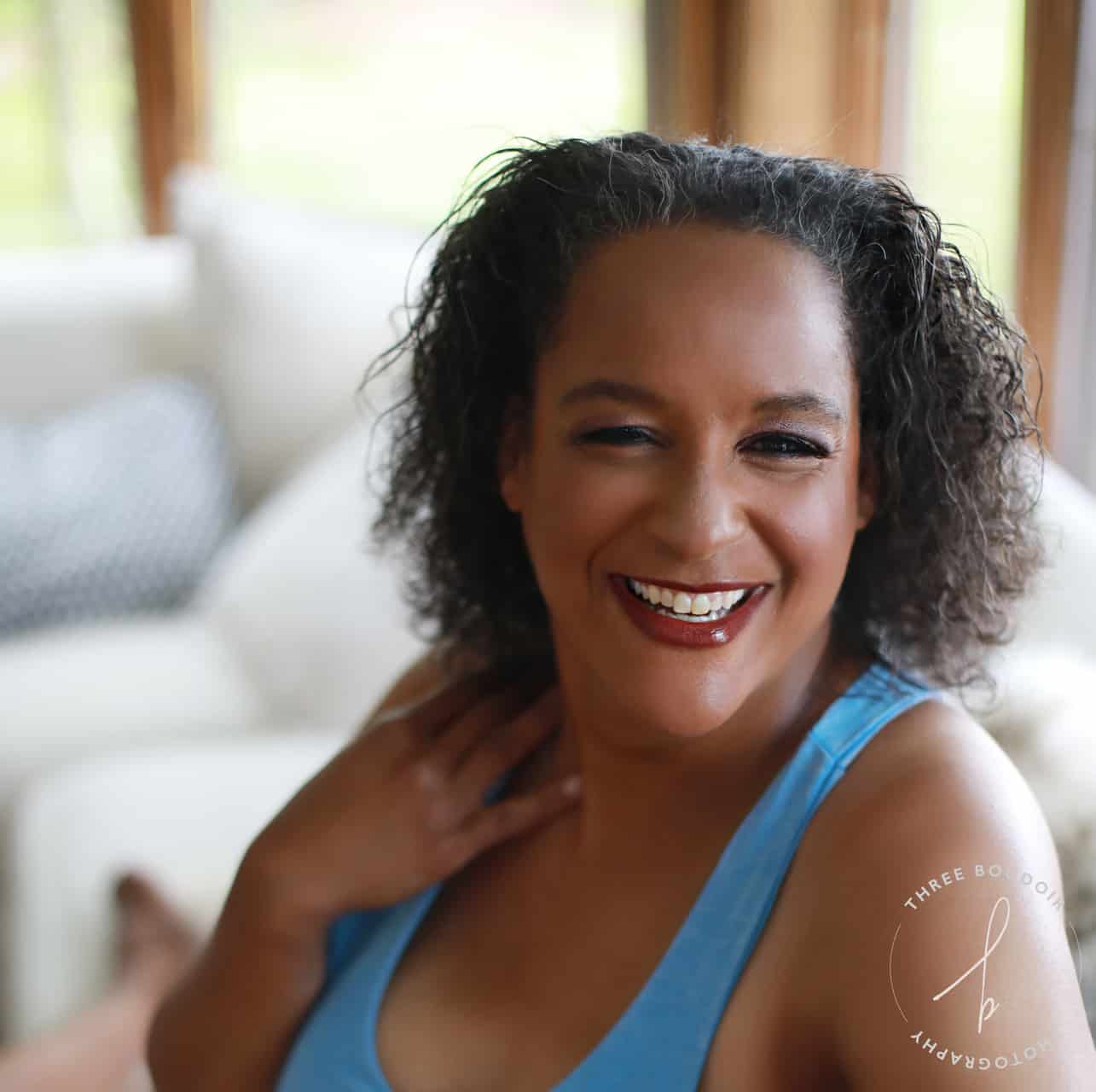 Safety Protocol: Three Boudoir is committed to providing a safe workspace for our team and...
Read More

Unless you've been in a Bravo Real Housewives worm hole - We did the math, there are 71 seasons...
Read More

I am a strong woman, but am I sexy? Meet Farmer Liz.

Editors note: This spirited woman will have you embracing all the little things that make you,...
Read More

We admit it: we love our shoot spaces. We love mixing them up to keep things fresh and new. We...
Read More

Overcoming an Eating Disorder through Boudoir

Healing can take many forms. Real, constructive healing gives us a chance to feel the most...
Read More

(Hint: It's a Boudoir Shoot) Take it from me, a former Playboy model…actually, I think I need to...
Read More

You know that feeling when the universe is on your side, you are in the flow and doors are opening...
Read More

MY THERAPIST SUGGESTED A BOUDOIR SHOOT

Editor’s note: Delaney is an incredible woman. We are touched by her strength. She came to her...
Read More

My husbands affair, breast cancer, self love, and my journey to boudoir

Editors Note: When "Ms. M" came in for her shoot with us we were blown away by her joy and...
Read More

We admit it: we love our shoot spaces.  We love mixing them up to keep things fresh...
Read More

When someone compliments you are you able to really receive it? To take it in, to own...
Read More

Self Love Jump Start from a Playboy Model

(Hint: It’s a boudoir shoot)   Take it from me, a former Playboy model…actually,...
Read More
Want to know when we write more? Want information on our pricing and packages?

Slip a love note into our locker using the form below. We will be in touch!